The Roland Cube 40GX has excellent effects, iphone compatibility, and a great design for portability. 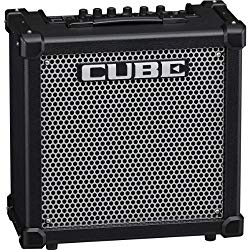 There are separate controls for bass, middle, and treble, and it also has a built-in chromatic/manual tuner.

The 40GX also comes with the CUBE JAM app for iOS, and includes the cable to interface directly with your iPhone, iPad, or iPod touch.

Plugging in to the output jack with headphones will mute the onboard speaker, and it’s great for recording to send your modified tones directly to an audio interface or mixing board.

The optional GA-FC Foot Controller works with this amp to switch between four channels.

The Roland Cube is a reliable portable amp with top-level features and tones.